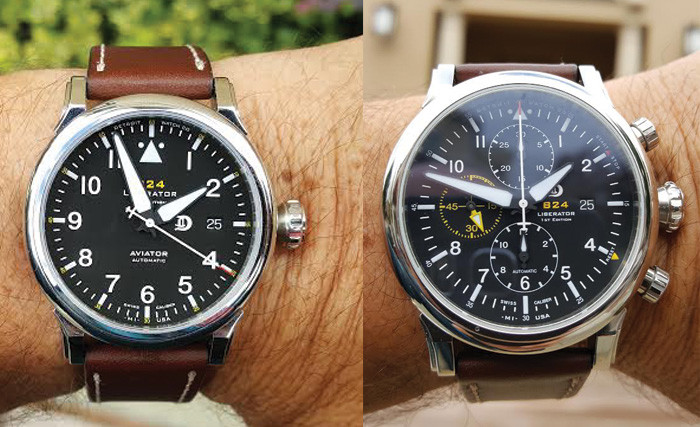 The Detroit Watch Company, founded in 2013 by the husband and wife designer couple, Patrick and Amy Ayoub, is one of the recent stars of the resurgence in the American watch industry.

Two of their watches commemorate one of the greatest examples of American airpower during World War II, the B24 Liberator bomber. The December 29, 1940 radio broadcast by FDR asked the country to build air support for the English fight against Germany.  Ford Motor Company and Edsel Ford stepped in with their pioneering efforts in aviation and mass manufacturing, building the Willow Run Bomber Factory. At it’s peak, the factory was able to produce one bomber per hour, which greatly helped the Allies win the air war in Europe.

I am honored to review these two watches, the B24 Liberator 1st edition 39mm and 44mm.  From the names of these two watches, you would think they are the same except for size, but that is not the case at all.  The 39mm is a dedicated Aviator watch and the 44mm is an Aviator chronograph watch. 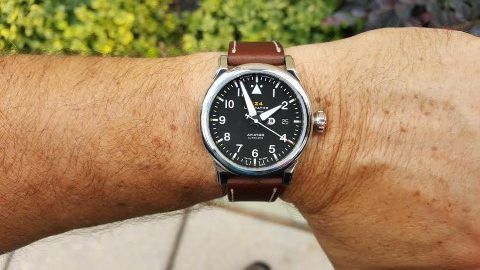 The 39mm uses the very successful Swiss ETA self winding 2824-2 movement.  The three hand and 3 o’clock date calendar 26 jewel movement is 28,800 vph with a 38 hour hour power reserve.  Sitting in the 39mm x 11mm watch case, it is extremely legible, with white on black Arabic numeral clarity.  Enhancing the watch face are Superluminova hour and minute hands, Superluminova hour markings and the classic aviation triangle and two dots at 12 o’clock. The flat antireflective sapphire crystal protrudes only slightly above the watch face bezel. This watch could not be easier to read.

When it comes to the details, this watch excels in every area.  The lugs have a stepped design and the sides of the case between the lugs are beautifully brushed.  The crennalated crown at 3 o’clock is beautifully decorated with an engraved Fleur-de-Lys, a symbol of the French who founded the City of Detroit in 1701.  The case back is attached with six tiny slotted screws and is beautifully etched with an overhead silhouette of the B24 Liberator and additional watch information. Water resistance is 5 ATM. 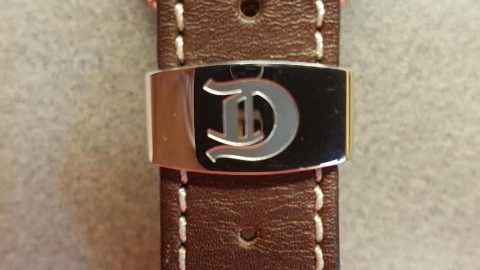 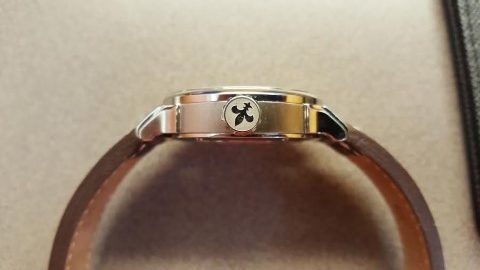 Other amazing details include in this watch include the plane shape of the tail of the white and red tipped second hand as well as the very small but highly legible yellow numerals at five second intervals around the edge of the dial.  I have never seen a watch with EIGHT lines of text applied with such careful precision that they do not detract from the beauty of the dial.  The old English D and date window at three o’clock are absolutely spot on as well.

The stitched brown leather strap includes a beautiful polished stainless steel folding clasp with a perfectly finished old English D on the buckle.  The folding clasp design eliminates wear on the brown calf leather strap, a big plus, in my book.  The best part is, each timepiece is hand assembled in Detroit, using the highest quality components sourced from Switzerland, Germany and Asia. Each watch model is limited production. If you are looking for a fantastic pilot watch with American roots, I urge you to check out this watch from Detroit Watch Company. $1,100. 1st edition limited to 100 pieces. detroitwatchco.com 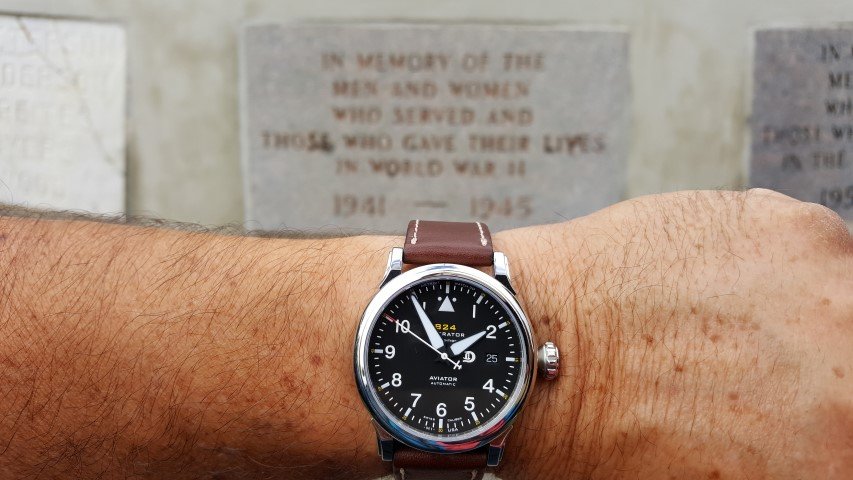 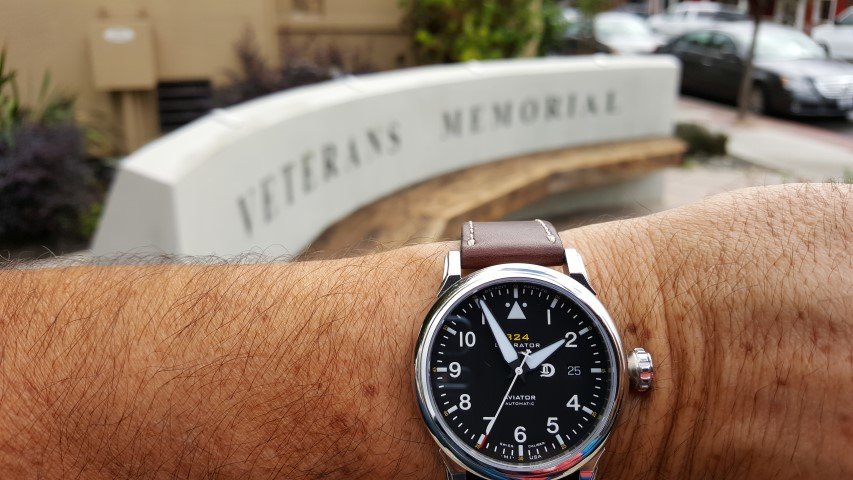 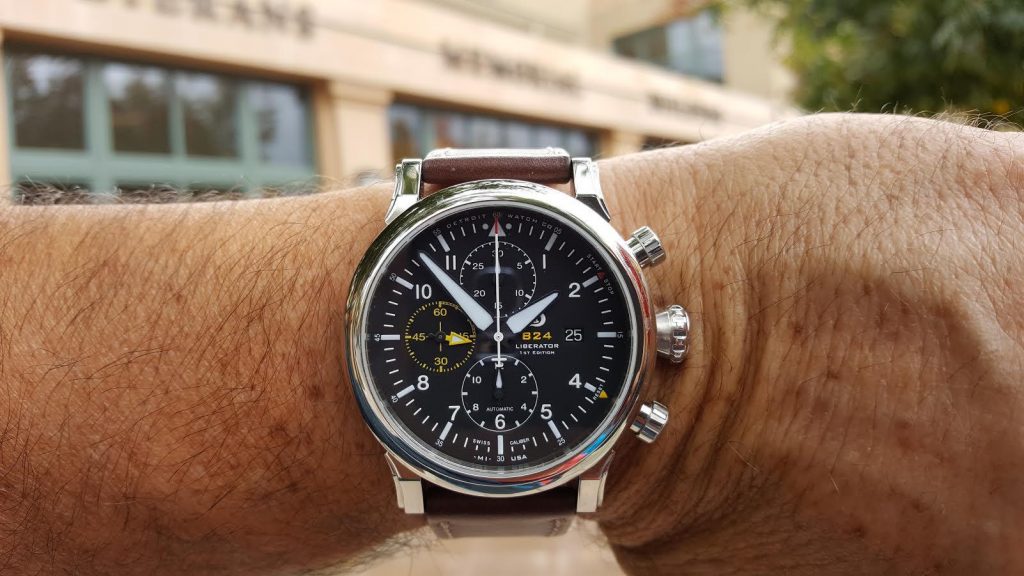 The companion chronograph to the 39mm is the 44mm.  The name of the 44mm is the same, except for the diameter of the watch, but the 44mm x 14.5mm watch is really different from the 39mm because it uses an automatic, self and manual winding Swiss ETA 7750 movement.  This 25 jewel chronograph also includes a small 12 o’clock minute subdial, a 6 o’clock hour subdial and a 9 o’clock second subdial.  In addition there is a white main second hand (with the same plane shape at the tail end of the second hand as the 39mm) now used for the chronograph function.

Most face markings are white, except for the yellow 60 at 12 o’clock, the yellow second subdial and hand at 9 o’clock, the yellow reset triangle at 4 o’clock and the yellow “B24” below the old English D.  The only red on the face is the tip of the chronograph second hand and the small triangle for the chronograph start stop at 2 o’clock.  Once again, there is substantial text on the dial.  I count NINE places on the face with text, but everything is clear, discrete and completely tasteful.  The hour and minute hands, all twelve markers, all three subdial hands and the classic aviation triangle and two dots are all filled with Superluminova.

The crown on the 44mm is very similar to the 39mm except it is larger.  The two and four o’clock pushers for the chronograph are beautifully polished and have the best click feel that I have felt so far. Reset action for the chronograph is extremely positive and instantaneous.  The case takes the same design elements of the 39mm up to 44mm and adds a more detailed engraving of the B24 on the case back and a more pronounced bevel to the case back edge.  This watch has five (rather than six) tiny slotted screws holding the watch back with the same 5 ATM water resistance rating as the 39mm. 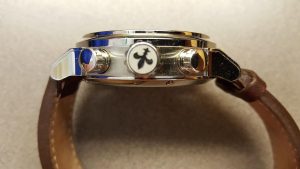 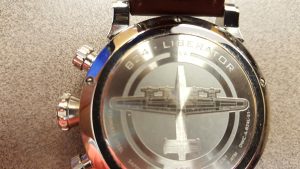 The watch strap and hardware of the 44mm appear to be the same as on the 39mm.  I see no reason to change the design or materials of any part of this strap and deployment clasp. Both watch examples I have came with brown calf leather straps, though black and tan are also available at no additional charge. The 44mm size is big for some people, but for a chronograph watch with so much beautiful detail, it is perfect for me.  This Detroit designed, assembled and tested 44mm aviation style chronograph shows that Detroit Watch Company is ready to compete in the low volume, high quality and value watch market of today. $1850. 1st edition limited to 100 pieces. detroitwatchco.com