Bomberg is one of the newer Swiss watch company’s, started in Neuchatel, Switzerland in 2012.  Bomberg’s watches are unlike any other that I am aware of in the Swiss watch industry.  They are far from conventional, designed for men (and women) who don’t want to be like everyone else.  Bomberg Chairman Rick De La Croix sums it up perfectly when he says their watches are for a target community that thinks “outside of the box”.  It would be difficult to mistake a Bomberg watch for almost any other line of watches currently on the market.

The watch for this review is one of the Bomberg Bolt-68 models, no. BS47CHAPBA.041-6.3, a Swiss automatic chronograph.  First introduced at Basel in 2013, 68 refers to 1968, one of the most significant years in history.  A few of the monumental events that occurred in 1968 include the assassinations of Martin Luther King Jr. and Robert F. Kennedy.  Other important 1968 events include Apollo 8, where man orbited the moon for the first time, the Boeing 747 was introduced, and the Tet Offensive by North Vietnam occurred, which resulted in the end of the US involvement in the Vietnam War.  In addition, 1968 was the debut of the first interracial kiss on television on Star Trek and U.S. black athletes stage a demonstration against racial discrimination during the Summer Olympics in Mexico City. 1968 was not exactly a positive year, but a very important year in terms of history making events. 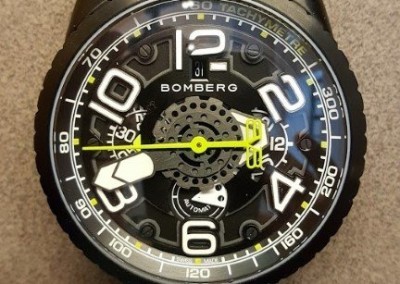 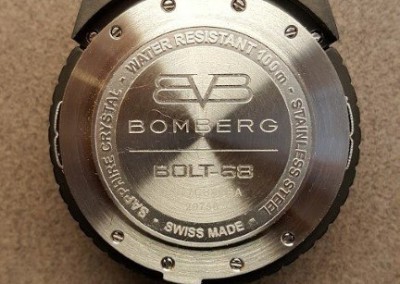 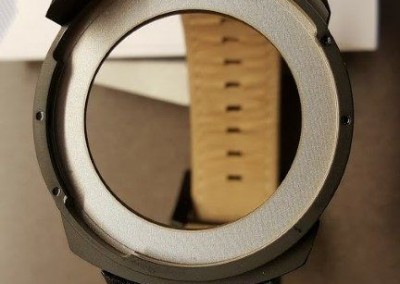 This particular model Bolt-68 is unique in many ways.  The first thing I notice about the watch is it’s heft and the position of the 12 o’clock crown and pushers.  Though it is described as 47 mm, my measurements say it is 52.5 mm diameter, 23 mm thick, 57 mm lug to lug with a 26 mm lug width on both sides. The watch is rated 100 meters W/R, has a black PVD finish with 8 small screws holding down the stainless steel engraved watch back.  The watch can be worn on the wrist or removed from it’s patented bayonet mount and strap.  The bayonet mount is similar to a lens mount for a single lens reflex camera.  When the time keeping module is removed from the base, it can be attached to the included medallion and chain and carried as a pocket watch.  This is a great option for people that want to carry a watch but don’t want to wear a watch on their wrist.  In this manner, the watch can be easily carried in a handbag or a pocket on a pair of jeans. 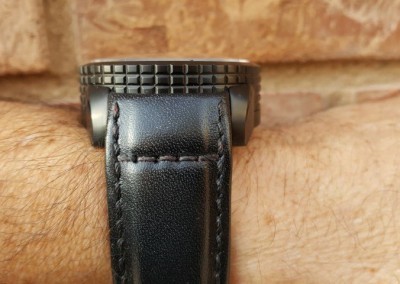 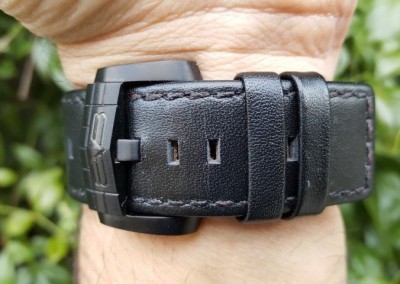 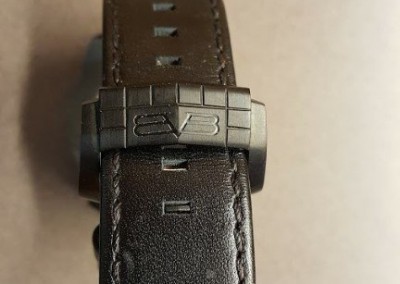 Everything about the Bolt-68 is different.  From the machined rectangular pattern that encircles the watch case, to the asymetical, calf skin strap with large machined Bomberg buckle.  The strap on the buckle side of the base attaches to the lower portion while the strap piece with the 9 rectangular holes is attached farther up the opposite side of the base. The unique hour and minute hands are attached to perforated metal discs reminiscent of gears on a bicycle.  Six hours (2, 4, 6, 8, 10 and 12) encircling the dial are cut out in white in what appears to be a black, laser cut ring.  The ring appears to be held down with six flat slotted screws and the hour minute and chronograph second hands from the center of the watch.  The Bomberg name appears printed on this ring, below the 12 and above the gear like discs of the hour and minute hands.

There are three subdials on the face of the watch. The three o’clock dial is for cumulative chronograph hours, the six o’clock dial is for running minutes, the nine o’clock dial is for cumulative chronograph minutes.  The long  thin green stop watch second hand, with the Bomberg logo on the tail, counts in 1/5 second increments.  There are also two small matching green markers that point to the position of three o’clock and the nine o’clock subdials.  The six o’clock running seconds dial is like no other I have seen.  It looks like a circling wedge of cheese with two holes in it and the word “AUTOMATIC” printed under the lower half the the dial. 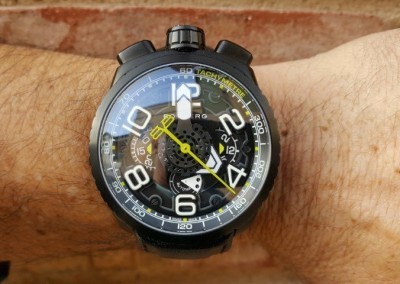 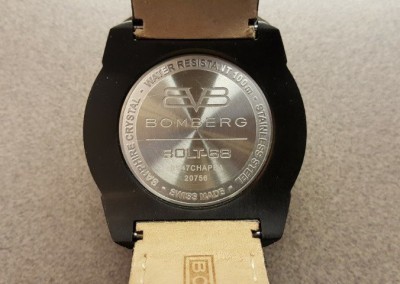 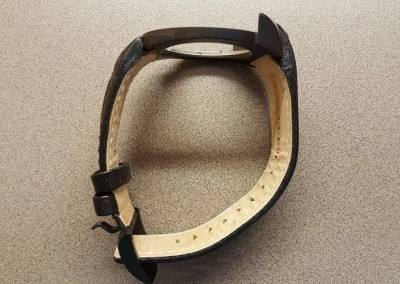 All numbers and markings are in white, with a lume of unknown specification but good performance.  There is also a deeply recessed date window in the lower portion of the 12 o’clock indice.  Depending on what is moving and where, the date window and portions of the three subdials can be covered up from time to time.  A tachymetre scale circles the inside edge of the bezel.   The domed sapphire crystal has a nicely beveled edge.  The beefy 12 o’clock mounted screw down crown is well machined with the company logo.  The two adjacent pushers are prominently machined with “START/STOP” and “RESET”.  Workmanship, materials and finish are excellent throughout.

The movement in the Bolt-68 is the Caliber 99001 from Concepto Watch Factory in La Chaux-de-Fonds, a major area of Swiss watchmaking.  Founded in 2006 by Valerien Jaquet, the company claims that all of it’s movements are completely manufactured in house.  From what I can ascertain, they consider themselves a major competitor to the Swatch owned ETA brand.  The 99001 movement is 25 jewel, self winding with a 48 hour power reserve and is 28,800 vph.  In my limited time with the watch, the movement performs well. 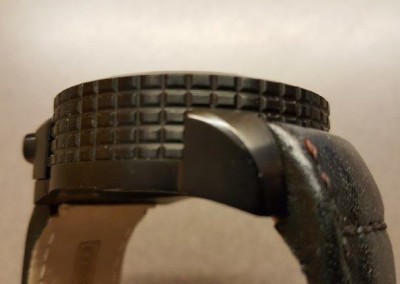 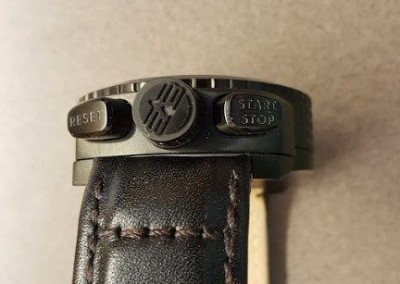 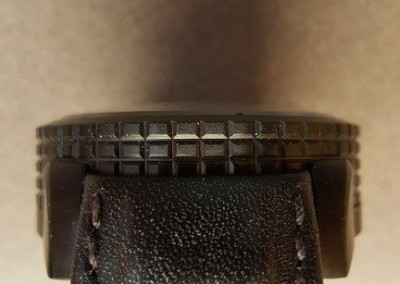 If you prefer conventional Swiss automatic sport or dress chronographs, this watch is not for you.  If you are in the market for a large, unconventional Swiss chronograph that looks (and operates) differently, with the ability to also function as a pocket watch, Bomberg has you covered.  If you are in the US in New York, Miami or Las Vegas,, Bomberg has retailers to serve you.  Other parts of the US and Canada are covered through their website.  Authorized retailers for the rest of the world are also listed on the Bomberg website.  $3,495 www.bomberg.ch