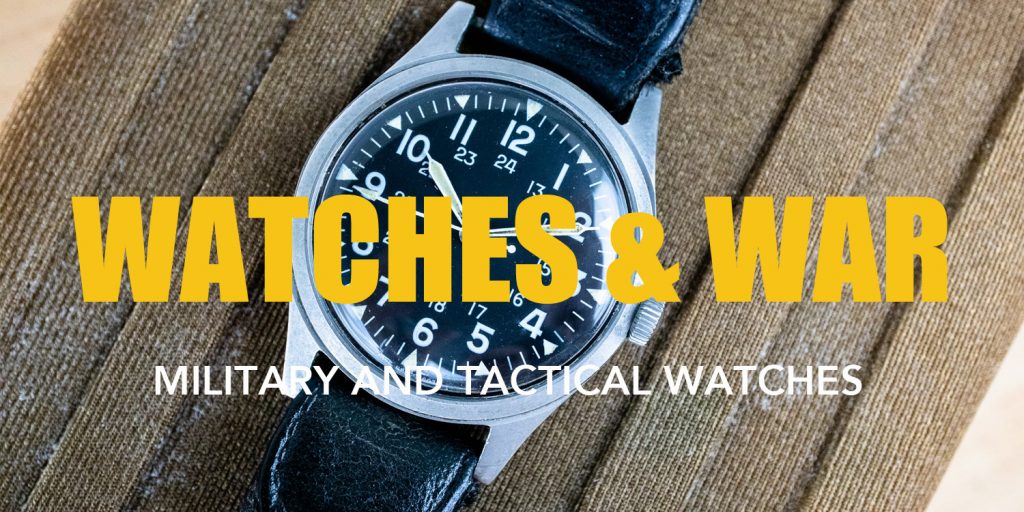 Military watches represent the pain and pleasure of so many horology enthusiasts. Unfortunately, along with railroad watches, these, especially vintage ones, represent one of the market’s most falsified categories of timepieces due to the sometimes truly inflated prices they have assumed over time. But you know: the appeal of the uniform, and the tactical watches coming with it, is unquestionable, and here is why we are about to discover them together.

Where do military watches come from?

It is said that wristwatches originated for military purposes. Photos dating back to the late 1800s show groups of intrepid officers carrying their pocket watches secured to their wrists by a curious leather case called a wristlet.

And from there, someone thought of soldering two simple rings to the watch case, creating the first wire lugs and inventing the first mens military watches. Many companies started offering these kinds of watches during WWI and giving them great publicity in the newspapers of the time. These watches then became the “model” for the tool watches that followed them, starting with Fliegers, the timepieces assigned to pilots and observers, and gradually all others, including divers.

Use by the armed forces and other organizations was accompanied by unique markings and serial numbers that identified the item. And the presence of these elements rocketed the army watches’ value, so many people started buying cheap old watches with a similar structure and “rigging” them to look like authentic military timepieces. In short, it is hard to find an authentic military piece – but even the heritage versions made by so many houses even today, with their dry, no-nonsense aesthetic, still manages to fascinate many “civilians” as well.

Why is it called a military watch?

Since the days of the trenches, war, and the needs of the military, have changed considerably. As a result, the quartz movement has flanked the mechanical one, proving to be precise and sturdy, as well as inexpensive: and this has caused the old mechanical army watches to become somewhat obsolete, at least for this specific function. Thus, Rolex Submariners – which equipped certain special forces in the 1950s – has given way to the more humble Casio G-Shocks as military tactical watches.

It must be said that rather than “military,” this type of watch could be called “sporty,” or to use a fashionable term, “explorer.” And so many, especially trekkers, mountaineers, and people who love the outdoors and survival rely on the best military watches precisely because of their qualities of precision and ruggedness.

But not only that, so many love just the style of tactical watches for men during their everyday life as well. So even if the height of their vicissitudes is to find parking downtown, they may still want to do so with a military-inspired watch. Again, it’s a matter of style!

What are the best watches for the military?

As we have said, we find plenty of military and military style watches that in one way or another have a military inspiration, all very different from each other: so let’s do a brief roundup to examine some of them, just to see which ones are closest to your style.

Some companies produce Heritage models that very faithfully echo some references from the past, such as field watches, the watches that were assigned, typically to officers and non-commissioned officers (in fact, they are also known as officer’s watches). And there are some highly fascinating ones.

The inspiration for MWC were the 1940s military watches for men, and the company has issued this “Dirty Dozen model, as the famous movie. The name of a well-known movie. This timepiece reprises the typical elements of the military field watch: heavy-duty construction, dark dial, large and clearly readable numerals, and sturdy fabric straps. It offers modern features, though: the caliber is automatic rather than manual, and the cost, at about $300, really affordable.

Military, or military-inspired, watches combine rugged features with a timeless design that is always current. And many companies, from the most famous to others, have tried their hand at producing these beautiful timepieces, even when their price qualifies them as luxury military watches.

This field watch takes up the whole tradition of military watches. It is large, well readable, with its 42mm size, and offers outstanding features thanks to its Swiss movement, ample power reserve, and scratch-proof sapphire crystal. In addition, the 200-meter water resistance makes it one of the best military waterproof watch with a traditional movement. It is an excellent all-rounder, able to defend itself well even in an exclusive meeting downtown. Price around $795.

Pilot watches are a full-fledged part of military watches: they feature a unique style, a large dial with easily readable numbers, and rugged features to be worn safely in all conditions. So, they are extremely popular even among people with feet safely set on the ground.

If you want a pilot’s watch with a little modern twist, the Black Kite from Ventus should be for you. This timepiece combines the traditional elements of pilot’s watches with an ultra-lightweight carbon case reinforced with steel, a sandwich dial with lumen, and a modern Seiko NH35 movement, while still staying under the $500 mark, which makes it very appealing even to those who don’t have too much money to spend.

The technology used in solar panels to recharge watches has undergone tremendous development, and today solar-charged timepieces are highly convenient and reliable in any situation. Several companies are working in this field, but among the many, we chose this timepiece from Citizen.

Citizen’s Eco-Drive system is one of the best on the market, and today it is also remarkably inexpensive. Citizen offers this “indestructible” timepiece that completely takes up the theme of pilot watches: black background, large luminous numerals, clearly visible hands, and date display. It also throws in a mineral crystal and 100-meter water resistance, with a price tag of only $199.

Chronographs have long been used for military purposes, whether for calculating artillery shots or charting a course in aviation. Of course, modern evolutions in weapon systems have made them obsolete, but their appeal remains, all right.

He who says Breitling says airplane. Air pilots long received their Breitling along with their certification, and even if you’re not a pilot, the feeling of having a Breitling on your wrist is sure to bring you to cloud Nine. This excellent timepiece, powered by a proprietary caliber, offers all the glamour of the 1950s, along with the results of modern evolution of materials and excellent performance. Price from about $4,000.

The quartz revolution has also offered new digital displays, and some companies have specialized in this field to create simple, reliable, and inexpensive timepieces. And the Casio military watches rate among the most popular.

The Casio G-Shock is genuinely one of the best tactical watches if you consider its features, and among its endless models, there is definitely one for you. The 6900 model line offers endless features, exceptional accuracy, virtually indestructible construction, and 200-meter water resistance. More, many variants start at around $100, so if by chance you manage to break it, you won’t have to sell a kidney to buy another one, making it one of the best mens tactical watches around.

As we said, Casio production offers many watches of various kinds and types, including several models with hybrid analog/digital displays that optimize the readability of information. And it is precisely why lots of soldiers worldwide consider them among the best tactical watches you can own.

A large, chunky watch measuring about 50 mm has many functions, including a convenient automatic calendar programmed to 2099. It can also be paired with your smartphone via Bluetooth to provide a number of useful functions – such as locating your phone that you can’t find at the touch of a button on the watch. And, in true Casio style, the price is almost incredible: only $99.

Modern Every Day Carry devices mount functions that would have seemed unimaginable once upon a time to accompany us on our adventures and give us much more than a regular watch can provide. And the best EDC watches do all that and more: not overly elegant, but so useful!

The Suunto Core is dedicated to those who love outdoor adventures, and it provides a myriad of directions to get your bearings. It is a rugged device, built of a high-strength resin, and among the various functions, you will find a barometer, an altimeter, a compass, and a weather indicator, which warns you if there are storms on the horizon – and it can also tell you the time with the absolute precision of its quartz mechanism. Prices around $150.

GPS is super helpful, and everyone knows it. Instead of incomprehensible maps, just look at a screen and immediately know your destination and the best way to get there. Sure, it doesn’t work 100% all the time, but it has become a handy function used by many. And this applies to our wristwatches as well.

Everybody who owned a car 10 years ago knows where Garmin comes from, and it is understandable why the company is one of the leaders in wrist-mounted navigators as well. This rugged-looking device is built to U.S. specifications for military grade watches. It offers navigation-specific features such as a three-axis compass, an altimeter, and support for all the world’s navigation systems (GPS, Galileo, and GLONASS).

Crowning the top military-style watch is not exactly easy. There are so many of them, and they are all very attractive. So making a choice among cool military watches is almost impossible, as it risks displeasing so many. Well, other than that, let’s jump in!

The Grande Maison offers among its models this “inspired” one with a discreet and unusual appeal. The Polaris has a Supercompressor case with a rotating inner bezel, thanks to a second crown, giving it a distinctive look. It combines the proverbial quality of the house with a spartan and timeless elegance that make it a classic to wear in any situation. Price commensurate with its lineage, about $5,700.

When it comes to finding the best tactical watches, it’s such a large field that it’s impossible to look at it all, but that doesn’t affect the fact that these timepieces, with their practical vocation, often prove to be a style icon of choice for people who don’t like to show off but appreciate things done right.

And in this sense, military watches have become a valuable style complement that continues to fascinate audiences around the world.