Aragon is no newcomer in the watch industry and in fact, it started way back in September 1991 as Android USA before recently renamed as is today. Founded by Mr. Wing Liang and based out of Florida, he has always been driven by a constant desire to exceed the expectations of watch enthusiasts. Following his motto, “Building into the future by respecting our past”, Mr. Wing Liang have always embedded his belief into his each of his timepieces which offers not only unique design aesthetically, but also using high quality materials and priced affordability to his consumers like myself.

Early this year, Aragon launched the Divemaster EVO series in 45mm & 50mm, either in IP Black or Stainless Steel case and a whole bunch of colour dials. What attracted me was the 50mm IP Black Abalone Dial but I was a bit worried if I could accept the dial and able to read time from it. Nonetheless, it was one of my favourite out of the EVO series and I was on the fence on this for quite some time. Few months later after the release of EVO, Mr. Wing Liang announced on his Facebook about an upcoming limited edition pink dial, which comes only in 50mm IP Black. How cool is that ! I stayed up whole night (due to the big timezone difference) for the launch and managed to order one. I was lucky because only 50 pieces were made and all sold out within an hour or less.

My first Aragon Watch and my first impression of it :

Let’s start with the positive.

Here’s my detailed review of the Divemaster EVO : 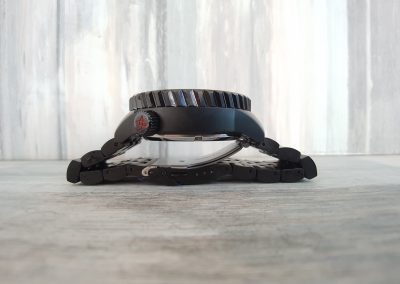 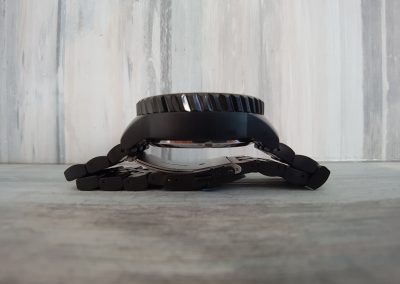 Case : It’s really large (50mm) and thick (17mm). But this is what differentiate it from the rest of the divers watch in today’s market (average between 42mm – 48mm). The weight of this (according to the website) indicate it’s about 11.3oz (~ 320gram), which you can easily felt the presence of it on your wrist all the time. The screw-down crown is placed at the 4 o’clock position which is great as it reduces the discomfort of the crown touching the wrist (left) or the back of the hand (right). As I have mentioned above, the positioning of the crown aligning with the date in the dial was well thought off by Mr. Wing Liang during the designing stage. The glass is made from K1 crystal, which is a treated glass that offers higher scratch resistance than mineral but is still prone to scratch and breakage. 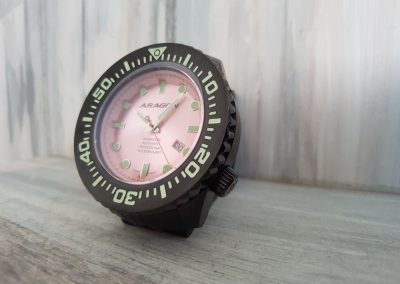 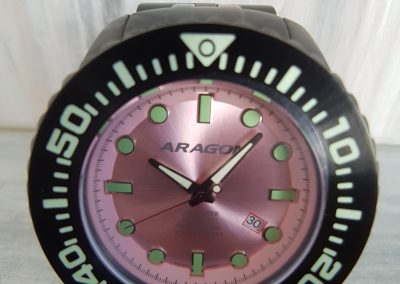 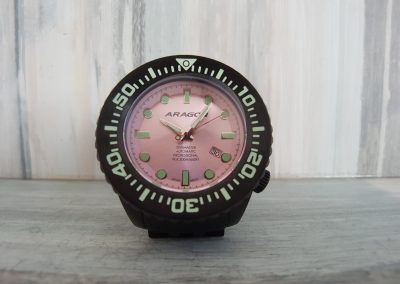 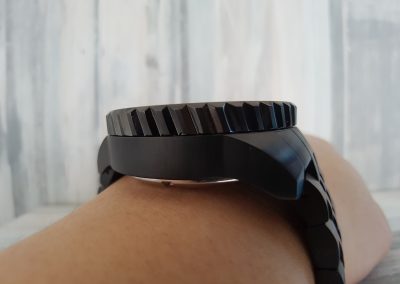 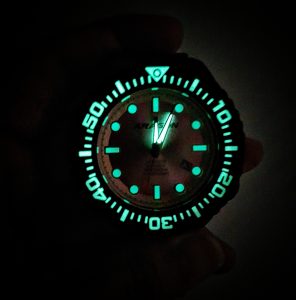 Dial & Bezel : Who would have thought a sunray pink dial matches perfectly with the IP Black case. I guess only Mr. Wing Liang can answer that. Anyway, lets start off with the hands. As I have mentioned earlier, it would have been nice to have actual divers hands (a large hour hand, medium minute hand and small second hand) to give it a more diver’s feel to the watch. I enjoy how the dial tapered from the bezel downwards with a ruler indicator design to showcase somewhat a mili-second concept. The bezel has a turbine style design and offers unidirectional rotation (counter clockwise direction), which is standard diver’s feature in measuring time. The markers on the bezel are large enough to be seen from the moon (just joking… but you get my point right ?). The bezel requires a little more effort in rotating it as it’s tight and designed to avoid accidental rotation. The lume on the bezel, hour markers and hands are great. Would have love the idea if it came in different colours of lume on each of the areas. 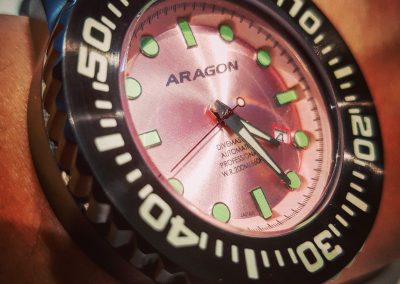 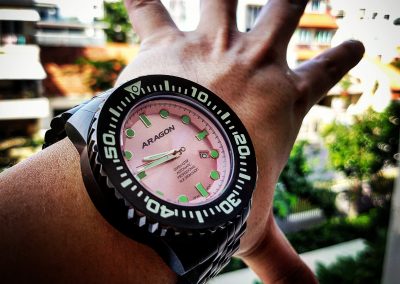 Movement : Nothing much to debate about it. Seiko NH35 is not really a precision movement, but definitely a workhorse movement that hardly breaks down. Even if it does, it can be easily repaired by a local watchmaker anywhere in this world. So it’s a no brainer Seiko NH35 is widely used in Aragon and many other microbrands too. Furthermore it’s the driving force to affordability as well. 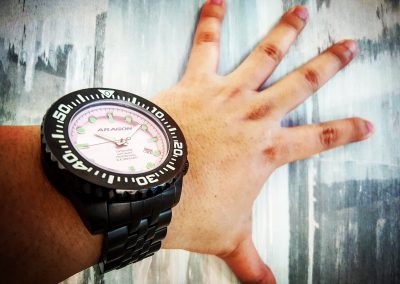 Bracelet : Came in standard IP Black solid stainless steel with push button fold-over clasp. To me, it’s a matching strap but I would have love to go a bit adventurous with this by offering shark-mesh IP Black bracelet instead. It would have look much more “macho” even with a pinkish dial. The standard bracelet lacks the diver’s extension on the clasp and the push button doesn’t feel securely locked down. A bit of a let down on this area, and I hope Mr. Wing Liang will look into improving this. 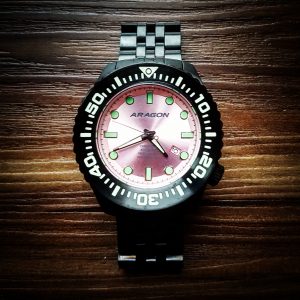 Finally… my verdict on this ? 2 thumbs up for my Divemaster EVO !!! Value and Quality over money, is all I can sum this up. Really enjoyed wearing it to work (yes, I wore this to work with a pink shirt !) and out with my family. This is my first Aragon watch, and I do not think it will stop with just a Divemaster EVO only. If you are already an owner of Android or Aragon watch, you should join this facebook group where Mr. Wing Liang himself is actively participating and interacting with his fans. I do think that this has a potential of a Divemaster EVO version 2, like how Mitsubishi does for its’ Evolution series for so many years with upgrades and enhancement to each of its’ series.