A Marvelous Time Machine from Tangramatic – Hands on review

I don’t think any other micro brand watch has drawn as much attention as the Nereid Argo from Tangramatic. The questions come as soon as it gets noticed (which has been often!) What is it? Where do I get one? 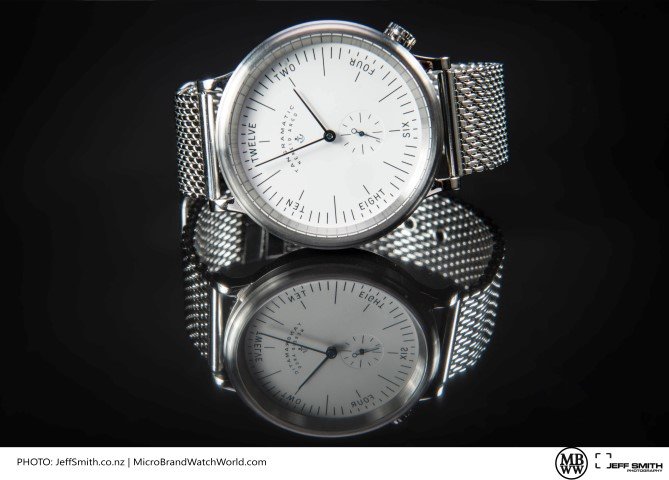 Once again, a big thanks to Jeff from Jeff Smith Photography for the photoshoot for this review!

What is it about the Nereid Argo that is so popular? Kickstarter has seen more than it’s fair share of minimalist watches with one seeming to pop up every week now as aspiring brand owners apparently “can’t find what they wanted at a decent price, so decided to make their own”. I think this partly explains the appeal of the Nereid, the minimalist aesthetic is still popular and this Bauhaus inspired design stands out from the Daniel Wellington clones with its understated elegance.

This is the second model from Tangramatic after their first success with the 39alpha. You can see the design DNA from the 39alpha in the Nereid but where the 39alpha was quirky and fun, the Nereid is elegant and sophisticated. The Nereid was actually released as two versions, the Argo seen here and the Pacific which features an extra 24h subdial. The Pacific also features numbers instead of words for the hours.

With regards to the finishing, I’m very impressed. The top of case has a brushed finish while the bottom is polished. it creates a nice contrast which breaks up the sides and makes it seem thinner than it is. When it comes to size its a very comfortable 42mm case diameter and 12mm height.

There is a nice selection of straps you can choose from when ordering a Nereid, a beige or blue canvas strap and a heavy or fine Milanese steel mesh. I was sent the beige canvas strap and the heavy Milanese. Currently there is only stock of the White dial Argo on the Heavy Milanese strap available according to the web store page. I liked both with a leaning towards the Milanese. I think it matched the watch very well and it hits the sweet spot for a dressy watch that you could also wear casually. The canvas strap is very comfortable and is a fantastic dress down option. It is quite long though with my 7 inch wrist wearing the strap in the second to last notch.

The watch is powered by the Miyota 8245. the 82xx series gets bit of a bad rep mainly due to the 3 hander 8215 which is surpassed by the 9015 with its higher beat rate. When it comes to the subdial versions though, the 82xx series more than delivers. The lower beat rate is imperceptible on a subdial which is probably why Miyota doesn’t even make subdial second versions of the 9 series movements. The 8245 also comes with a nice Côtes de Genève finish on the movement which is shown off by a skeletonised rotor. It’s a nice change from the otherwise dull 8215 and 9015 finishes. When you’re using a pretty movement like that, you better believe there’s an exhibition caseback!

A 360 degree view can give a better idea of how the light reflects on the case. (it’s a pretty big gif so give it a minute to load)

This is a novel design that stands out from the crowd and maybe that’s the simplest way to sum up its appeal. Crowdfunders are often criticised for not being bold enough with their designs, well it would be difficult to accuse Tangramatic of that. If you want to support bold design in the micro brand world then here’s your chance. $455 AUD +$10 for a mesh strap option ($465 AUD is approx $350 USD at time of writing). Tangramatic.com.au