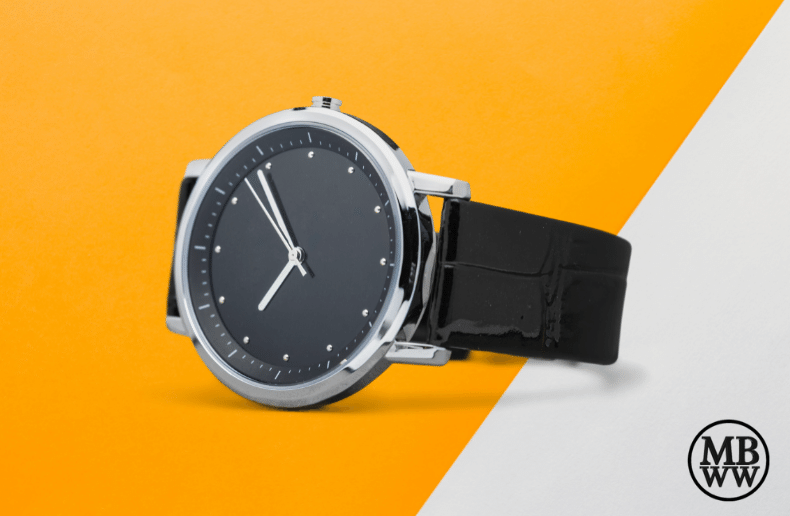 As a horology lover, you may find yourself looking at watch ads, appreciating the design and overall style in the details of the photos.

If you look a little closer, you’ll see that the watch hands all indicate that the time is ten past ten. Where does this curious habit come from, you may ask? Let’s find out!

Before we look into why timepieces are often represented with this time, let’s consider some questions to shed light on our relationship with watches. This is all connected to the terminology we use to describe clock parts.

The hands, first and foremost, must be addressed. What are the hands? They’re the most basic parts of our bodies’ extremities. And why do we call watch hands just that? Because they show time! Indicating time occurred before clocks were invented, as there was already a device to mark time: sundials, which have been used since the time of the Egyptians. The sundial’s gnomon cast a shadow on a field divided into sectors during the course of the day.

An analogy that is not surprising but serves as a reminder that our clocks are representations of the cosmos around them is that modern clocks have noon positioned at the top, just like the sun is at its highest point in the sky at that time. What we now call hands should actually be named fingers, because they are what once indicated the sun’s position in the sky.

This analogy was then adopted in “modern” clocks to indicate the hours on the dial, which was also dubbed “face.” So, when we wear our watches upside down – or, better still, inside out – we are trying to conceal their faces.

The face and hands are two anthropomorphic elements in the clock, but we’re missing how these elements combine, in our minds particularly, due to pareidolia, which is an unconscious mental process that causes us to search for assonances between things of various kinds. We enter a process of pareidolia, for instance, when we see a shape in the clouds, for instance.

These two anthropomorphic elements in the clock combine in our minds through the unconscious mental process of pareidolia, which causes us to search for assonances between different things- like finding animal shapes in clouds, for example. In our case, we visualize a face on the watch’s “face”, where the hands symbolize its mouth.

Let’s get to the core of the problem, which is, in fact, its solution. The hands positioned in this manner are intended to form a pleasant and appealing image. Try moving the hands back to a different time. At 9:15, the smiles flattens; at 8:20, the smile turns into a frown.

If we try to tighten the smile by putting the hands at 11:05, though, the smile turns into a sneer. Furthermore, the hands would conceal the brand’s logo because of its position at twelve, which is where our eyes first migrate to (which is why the logo is placed there).

When looking at your computer screen, your eyes will naturally settle at about 2/3 of the height of the screen, as the “golden section” recommends. It’s the same with watches – and what manufacturers care about is letting people know that the watch is their brand.

Pareidolia plays a hand in the bilateral symmetry we keep mentioning, like how the hands are mirrored at the two ends of the dial. A person’s face is also mirrored, relatively at least. A lack of symmetry is upsetting, which is against what brands are looking to evoke from their customers.

There are more, but these are the main elements that jump to mind when we see a timepiece, and make it all the more fascinating.

The discovery of the two hands- for hours and minutes- was relatively recent in horology. Our ancestors began evaluating watches according to the criteria of pareidolia as late as the end of the seventeenth century. We’ll never know for certain if there was a love for watches as there is today.

In reality, the only records we can still see that describe them are portraits, but it seems that painters at the time were unaffected by this phenomenon, depicting clocks with all sorts of times on their dials. This “transference” began much more recently than this, since advertisement was born. We have an abundance of records from then.

We know that the first watch advertisements date back thousands of years. Abraham Louis Breguet published a printed brochure to promote his “Souscription.” Only in the late 1800s did watches start being depicted in ads, drawn by hand at the time.

The 10:10 phenomenon gained momentum around the seventies. Until then, old advertisements showed random times. One thing they all had in common, though, is that the watch hands never hide the most important details.

A seemingly simple detail, such as placing hands at a certain moment when photographing a timepiece, has an intricate procedure behind it. Even this compels us to learn more about the attention to detail that watchmakers display.

This partly reassures us that when we buy a watch, our money is spent on a truly professional piece.