Traditional Watch vs. Smartwatch – Which one should you buy? 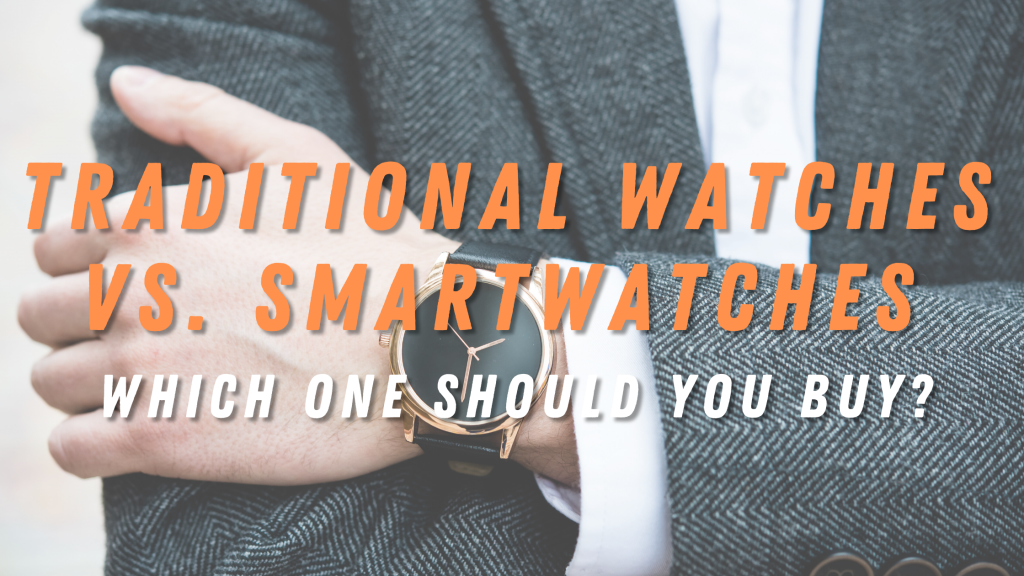 With the world becoming completely digital, we’ve learned to meet, work, study, buy, sell, and have fun through technology. Even our equipment is getting caught up in it, as seen by the recent release of smartwatches. So many types exist now that you may be wondering what is best to buy. If so, you’re in luck, this article is just for you!

What is a traditional watch?

The traditional watch is the real descendant of timekeeping, which has been around since the 1500s and is still in use today. The technology behind watches varies, with mechanical, electronic, and hybrid systems being used to power them.

Traditional timepieces, however, differ from smartwatches since they do not require a connection to a network in order to exchange data that affects us personally (such as emails and alerts that are tailored to us). They serve as a kind of portal into what is now known as the metaverse.

Non-electronic models, such as radio-controlled timepieces that connected to communication networks to exchange data for time-setting, are still considered conventional wristwatches.

What is a smartwatch?

A smartwatch, in contrast, is a type of device that we wear on our wrists and connect to the internet via various systems to transmit and receive messages and notifications that are tailored to our individual needs. A typical smartwatch is usually linked to a smartphone, allowing us to take advantage of their capabilities – which extend far beyond those of a traditional watch

The true distinction is made by the prefix “smart.” The smartwatch serves as a tool for interacting with the digital world around us on our own via its features.

This argument is one of the most polarizing on the internet. The two sides engage in a never-ending struggle to prove which is superior between the pair, without realizing that these two objects are purchased for two very distinct reasons, and therefore cannot be compared side-by-side.

According to some smartwatch lovers, smartwatches are more accurate, less costly, and perform more activities than traditional watches, which is correct. Even quartz timepieces created in the 1970s had these qualities, so why are traditional mechanical watches still still around?

The answer is simply that a traditional timepiece is much more than just a timepiece. When an item succeeds in going beyond its purpose, i.e., to signify time, to the realm of expression – that is, the style with which it keeps time – it becomes apparent that this thing no longer represents merely the satisfaction of a practical need, but the expression of a style choice.

The traditional watch has always been a functional object with an array of different meanings: It was an item that identified a social class and a distinct style that revealed its owner’s personality. And, even today when its fundamental function of informing us of the time as precisely as possible has been surpassed, its function as a style accessory is valid to this day.

While a watch may be a fashion statement as well as a useful took, the smartwatch lacks the emotional function of a traditional watch, so it will never be able to replace the latter.

So, other factors aside, smartwatches will never be able to replace the traditional watch because their nature as ephemeral artifacts of technological progress precludes them from ever doing so. Soon enough, technology will develop something new, and smartwatches will join the list of obsolete technologies that include the telegraph, gramophone, audio and videotapes, and their players. They will become something that our grandchildren will likely look back on with amusement.

However, other ornamental objects like traditional clocks and jewelry will go on to accompany their everyday lives in their own way- as obsolete and inaccurate as they are, they will remain everlasting.

Let’s look at the characteristics and drawbacks of these two sorts of time measurement tools, as well as their advantages and disadvantages in order to assess their similarities and differences.

As a result of this, we’re able to get in tune with them better and develop a far more accurate image of how the smartwatch phenomenon has impacted the watch market as a whole.

Here, traditional timepieces outperform smartwatches. Not for lack of power reserves: automatic timepieces usually have a two or three day battery life, while a smartwatch can survive for a couple weeks when not in use; instead, smartwatches consume a lot of electricity while operating and thus must be recharged frequently. Even if some smartwatches utilize solar energy, they’re still “continuous cycle” devices.

However, there is a problem with these technologies over time. These technological gadgets are not designed to last; they require an accumulator to function, much as our smartphones do, and like that of our smartphones, their “operational life” has an expiration date. Also, the natural obsolescence of models leads many people to only use a smartwatch for two to three years before replacing it with a newer model that offers better technical features.

A regular timepiece, whether mechanical or quartz, has no expiration date; the average quartz or automatic timepieces’ durability/lifespan is virtually limitless (unless something breaks). A typical watch will continue to function in the same manner for ten years as it did ten years previously. It may even gain value because it is less common and, therefore, more valuable.

Precision is not the sort of trait that mechanical timepieces benefit from. The best automatic watches’ accuracy, referred to as “Superlative Chronometer” performance, amounts to a few seconds per day. Such timepieces are at a disadvantage because they can’t compete with the built-in accuracy of electronic timepieces like smartphones and quartz watches, which are often less expensive.

Traditional electronic watches are in equal competition with smartwatches. Smartwatches, of course, have the advantage of absolute control over the time because of their automated coordination with atomic reference clocks. However, in comparison to the latest quartz watches, such as the Precisionist mechanism from Bulova, which is credited with an accuracy of ten seconds per year, the performance is very similar.

Smartwatches are now priced similarly to smartphones, while traditional timepieces range in price from a few dollars to many millions of dollars. So, when we consider why watches are so expensive, we must keep in mind that they can also be quite cheap without being of poor quality.

Statistics show that smartwatch sales are most prevalent in the most attack sectors of the traditional watch range, occupied by those known as “fashion watches”: timepieces that don’t meet the criteria of durability, but rather follow the dictates of what is known as “fast fashion,” which offers very fashionable clothes and accessories that are not built to last.

This indicates that the main fight between traditional watches and smartwatches has a limited impact on “real” collector’s watches, which are still in high demand. So, to sum up, mid to higher-end traditional timepieces – those that last – generally cost more than smartwatches.

Smartwatches are typically minimalist and modern, especially since they must provide a large screen to facilitate its use. However, the smartwatch includes a fun feature that makes it both amusing and adaptable: the software allows you to download a variety of different user interfaces inspired by famous timepieces, giving your smartwatch a fresh look at any time.

On the other hand, traditional watches have a clear well-defined look that can only be changed by replacing the strap. This characteristic makes smartwatches considerably more flexible than traditional watches, even if their appearance is necessarily ephemeral. You may dress a Nautilus for lunch and a Daytona for supper without spending too much money, though.

A smartwatch, without a doubt, includes cutting-edge electronic technology. However, in order to keep up with the ever-changing state of the art, technological progress is moving at breakneck speeds – and that same smartwatch will be outdated in two years’ time. Traditional watchmaking, on the other hand, has remained largely unaltered since 1650, although it continues to bring important changes to traditional watchmaking. The discovery of new materials and processes, which was previously unimaginable, provides us with fascinating realms to explore in a technique that appeared to have exhausted all possibilities.

For example, mechanical watchmaking is being revolutionized by new technologies and elements developed with silicon. Among other things, we’d like to point out Zenith’s Defy Lab system based on a large oscillator printed in monocrystalline silicon, which replaces the whole pallet and balance mechanism (saving about 30 different parts), and vibrates at 15 Hz, as opposed to 4 Hz in traditional mechanical watches.

A watch is nowadays worn on the wrist, and serves as a source of interest for its design and look, much like a haircut, a pair of shoes, a tattoo, or any other item we may wear in our social life. People who meet us for the first time judge us based on our appearance and the message we communicate to them through our demeanor. Consider someone wearing a dress watch versus someone wearing a diving watch—they might cost the same, but they give off different impressions.

This theme is also represented by traditional watches and smartwatches. Given the significant difference among all of these components, it’s impossible to define what exactly it means to wear a watch versus a smartwatch. Traditional watches with complicated mechanisms put any smartwatch to shame, while others are straight up steampunk. In a nutshell: there are no hard-and-fast rules in this field.

The decision to wear a timepiece on one’s wrist is already a significant indication of our attention to detail and desire to use a timepiece. A choice is typically made for personal enjoyment, with little regard for displaying an item.

In our view, wearing timepieces and smartwatches is a supplement rather than a substitute since watches can’t perform all the functions that a basic smartwatch can, such as monitoring one’s health.

Furthermore, the smartwatch allows you to integrate part of your phone’s capabilities onto a smaller and more portable device, allowing for greater convenience. Traditional timepieces, on the other hand, offer a lot of performative flair. It depicts an item of worth that lasts through time and is remembered by others as a significant legacy.

In a nutshell, they are two distinct items that work well together. And since we have two wrists, why not make the most of them? You could include a smartwatch into your watch collection if you start it – it won’t be the end of the world.

WindUp Watch Fair NYC is poised to make a splash