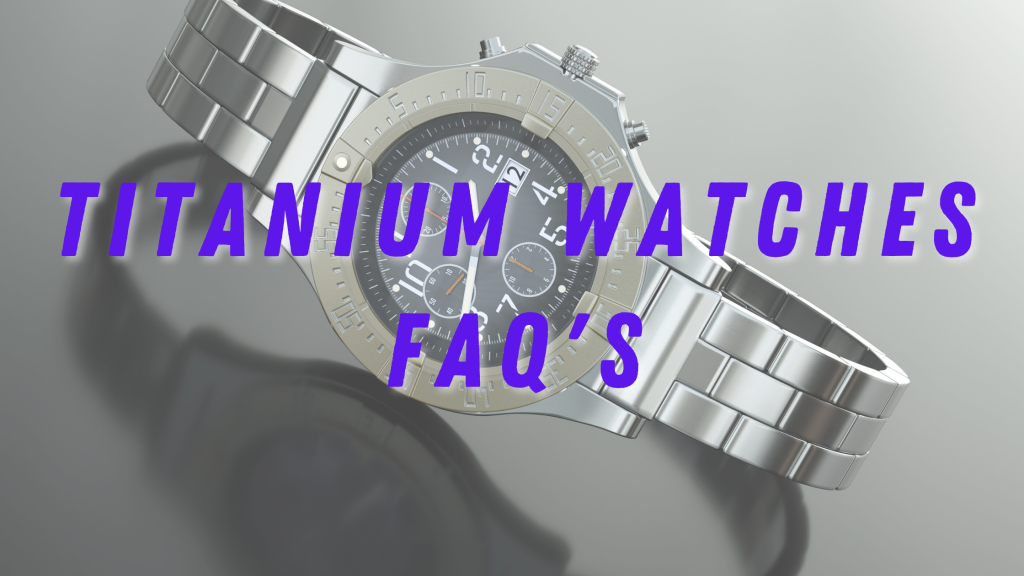 The development in metallurgy has been paramount in the evolution of watchmaking. The discovery of materials and the changes in watch movement throughout time have made it possible to produce what watches are today. As a result, we’ll go on an exploration to discover exotic and light titanium as a material.

Why is titanium used in watches?

Titanium is well-known for its physical qualities, such as being highly corrosion-resistant, being antimagnetic and its light weight. It is, however, not easy to work with, which is why, even though it was discovered as far back as 1789, it only began being industrially used in the 50s.

In comparison, titanium is as strong as steel but is lighter by 40%. It weighs 60% more than aluminum but is twice as strong, with its surface being as hard as a diamond. It is, however, more expensive to work with because of the difficulty to cold-work it, which wears out tools more quickly, which is why titanium watches cost more than steel watches.

The Citizen X8, the first titanium-cased quartz timepiece, was produced in 1970 and certified as a chronometer. Still, it was the cooperation between IWC and Porsche in the 1980s that really started this material on its path to becoming popular. Its lightness was enhanced by the fact that these were the first watches of this type that used mostly quartz movements. As a result, they felt unbelievably light when worn on the wrist.

What grade of titanium is used for watches?

Titanium is not frequently used “pure,” however like other industrial metals, it is combined with other elements to improve the final alloy’s qualities.

Grade 2 and Grade 5 are the two grades of titanium, which are utilized for a variety of technical applications. The “foundation” grade of titanium alloys, Grade 2, has higher mechanical and corrosion resistance properties and a high melting point than Grade 5, which includes 6% aluminum and 4% vanadium. So in more expensive timepieces, you will likely encounter Grade 5 titanium.

When it comes to density, titanium is roughly half that of stainless steel – 4.5g/cm3 versus 8g/cm3, making a titanium watch extremely light on the wrist and noticeably apparent in big technical timepieces such as dive watches. For example, a titanium Tudor Pelagos weighs 157g in comparison to the Rolex Sea-Dweller, which is 212g, which is about a quarter the total weight.

In order to answer this question, several blogs have done significant testing of stainless steel and titanium watches under similar conditions – that is, prolonged and continuous stress and immersion in fresh, salt, and chlorinated water – to see how they perform and determine their durability.

They all agreed that steel and titanium have comparable performance under strain, with steel being heavier and having a more solid and metallic feel, whereas titanium displays a lighter and more “natural” feeling to the wrist, similar to materials such as carbon or resin. In terms of price, titanium watches were typically considerably more expensive than those constructed from “plain” stainless steel.

To sum up, a titanium watch has a distinctive effect that you either love or not, leaving little room for compromise!

Scratches are a major concern for watch enthusiasts, and this may be one of the reasons why titanium timepieces have yet to be widely accepted, as they are most susceptible to scratches than stainless steel ones. Still, Victorinox produces its I.N.O.X. line of quartz and automatic watches – which are mostly meant for heavy-duty use – in titanium.

Tests have shown that the scratches on titanium are more apparent and tend to scratch a bit more readily than those on stainless steel. It all depends on the metal’s finish, whether polished or satin, as well as its surface treatment. Some coatings, such as Citizen’s Durabrite or special DLC treatments, make titanium scratch-resistant. Even though it is scratched more easily, titanium can be polished more effectively than regular stainless steel.

Finally, be wary that if you don’t have the appropriate equipment, you’ll risk causing damage to the metal’s surface by attempting it yourself, because a DIY treatment would require significant cost for a later restoration. Also, keep in mind that titanium is less glossy than steel and has a less vibrant gray color; therefore scratch removal must take this “aspect” into account.

Is a titanium watch waterproof?

Titanium has excellent technical and mechanical properties, as well as a high melting temperature. Furthermore, it has an important benefit: low thermal conductivity, which makes it more durable, which reduces its chance of deforming or expanding and contracting like steel does, making it ideal for underwater marine activities.

Furthermore, titanium is more corrosion-resistant than stainless steel, even 904L, the surgical grade used by Rolex, making it an ideal material for this usage. This is evident by the fact that titanium is frequently utilized in the creation of technical metal components that must be constantly immersed, such as water pumps or components of seawater desalination systems.

Several watch manufacturers have adopted titanium in the field of horology, including divers’ watches as well as GMT and pilot watches. Titanium is not as good a material for dress timepieces, even if Seiko is employing it to great effect in its Grand Seiko collection.

Does titanium rust or corrode?

Pure titanium is one of the most durable metals on the planet, so it won’t rust like steel. However, titanium that is commercially utilized is never pure: it is, in reality, a titanium alloy composed of different elements. And these could certainly rust; albeit to a lesser extent than steel.

The formation of titanium oxide, which is a kind of translucent and protective film that protects the titanium beneath (as well as having antiseptic qualities if exposed to sunlight), occurs when titanium interacts with oxygen. This process is critical since it allows titanium to be kept essentially unchanged over time without decaying in such a way that its features are lost. For this reason, many human prostheses that are used to either supplement or replace bone parts damaged by osteoporosis are made of titanium.

Another advantage of titanium is that it is entirely hypoallergenic, so even those who have metal dermatitis will probably find that titanium watches help them.

Can titanium watches be polished?

Titanium is an exceptionally robust metal, but even minor scratches are apparent. This is partly due to titanium’s tendency to cover itself with the titanium oxide patina, which is modified by the scratch and makes it look deeper than it actually is.

So, after being scratched, a titanium watch appears to be considerably more damaged than it truly is, while a stainless steel watch does not. Titanium, on the other hand, proves to be significantly simpler to polish than steel: just keep in mind that titanium is less brilliant than steel and has a grayer color with a smoother satin finish that makes it more comfortable to wear.

There are several items on the market that may be used to polish titanium while preserving its distinctive appearance. If you want to polish your titanium watch or bracelet, be sure to use these particular products rather than general multipurpose polishes such as Cape Cod cloth, which might remove too much of the damaged area relative to the rest.

We advise you to conduct a test on a small area, such as the back of the watch, to ensure that the product and your polishing skills are adequate.

In conclusion, stainless steel and titanium watches are generally comparable. It pertains to the watch’s aesthetic and tactile qualities, which have little bearing on the watch’s quality or endurance.

If you’re used to wearing a steel watch, the impact of titanium may be startling, as titanium timepieces are considerably lighter, to the point that they appear flimsier than they really are. Despite your gut instinct, data shows that the average titanium and steel automatic timepieces have a similar lifespan and durability.

Titanium is lighter and more comfortable than steel. It also causes less wrist discomfort, especially when compared to low-cost steel timepieces that are frequently composed of alloys including nickel. A titanium watch, on the other hand, is generally more costly than its steel equivalent.

Additionally, if you don’t want scratches, a titanium watch might be aggravating since it shows clearly, however you can remove them just as fast. In short, the greatest thing for titanium timepieces is to be able to wear them for a few days and see how you like it before making a decision about whether this is the right material for your wrist.

Automatic Watches Movement: what is it and how does it work?

What is a GMT Watch and How does it Work?