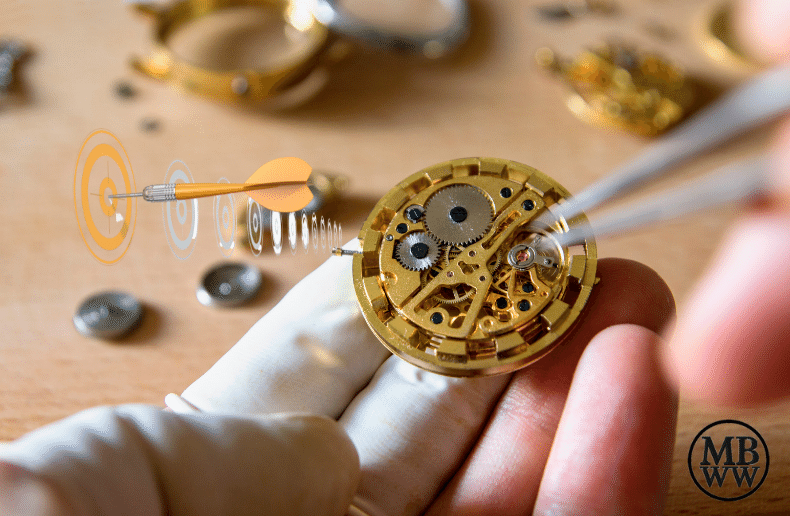 When it comes to watches, accuracy is a frequently discussed term that is extremely intricate. Let’s address the question that many people ask themselves: whether their automatic watches are more or less accurate and how they may improve their performance. If these are the questions you’re asking yourself, you’ve come to the right place.

Yes: in fact, automatic watches are extremely accurate, just as manually wound mechanical timepieces are. In principle, since the degree of accuracy of a watch is determined by several elements, including the amount of winding on its mainspring, an automatic watch that is worn on a regular basis tends to have a constant level of accuracy because its mechanism is wound by wrist movement, and therefore, remains wound at all times when worn regularly.

But this is only one of the numerous factors that determine a watch’s accuracy, including magnetism, temperature, the location in which the watch is functioning, and a thousand other variables.

What is acceptable accuracy for an automatic watch?

It is important to mention that the watch’s accuracy does not depend on whether it is automatic or hand-wound- it depends on the adjustment of the movement mounted inside. Each watch caliber behaves differently, depending on the manufacturer’s accuracy as well as how it has been adjusted and controlled.

This means that the manufacturer’s specifications and the watchmaker’s abilities define the performance of the watch, automatic or manual.

Do automatic watches get more accurate over time?

It’s a myth among watch connoisseurs that watches require some sort of break-in period to be properly functioning. When watches were manufactured almost entirely by hand, running them through their paces would undoubtedly help them keep time.

Today, when calibers are industrially made in thousands of pieces, and some of these, like Swatch’s Calibre 51, are adjusted by laser, this legend, connects us to a time when craftsmanship was king, is less true. Furthermore, we must remember what was said above: the calibers that leave the factory are already adjusted to meet specific standards.

Today, when calibers are mass-produced in a thousand different ways, and some, such as Swatch’s Calibre 51, are adjusted by laser, this legend, possibly linked to a time when craftsmanship ruled, is not necessarily true. Moreover, as we previously mentioned, the calibers that leave the manufacturer have already been adjusted according to specific standards.

How do I make my automatic watch more accurate?

All in all, the difference lies simply in the adjustments that are made. Apart from minor internal elements, the various calibers differ only in terms of modifications. This implies that a good movement can achieve outstanding performance if it is appropriately adjusted by a watchmaker – just as you can transform a stock car into a racecar with the aid of an expert.

In the case of watches, this professional is your trusted watchmaker, who knows how to get the best out of the movement in front of him. Then, after attentive service, he can adjust it to perfection to achieve the best performance allowed by its technical specifications and construction elements.

The expert-in our case- is your trusted watchmaker who knows how to best utilize the movement before him. After attentive service, he can then fine-tune it to perfection to obtain the finest performance permitted by its technical standards and construction materials.

Is it normal for an automatic watch to lose time?

Yes, an automatic watch’s performance can vary significantly after being worn and, more importantly, in different situations of usage. And there’s a very simple explanation for it. An automatic timepiece is a tiny mechanical device driven by the movement of spring and the self-oscillation of a wheel on itself. Because of this, it features limited tolerances in its many tiny structural components.

It’s made of metal, and it must be disassembled and oiled every five years to function well. Consider the impact of sudden heat flux on those metal pieces, which are known to expand with heat and become more flexible, the tiny coil spring-made of a very thin sheet of special metal alloy- regulating the balance’s oscillation, and the daily shocks and strains this miniature machine is subjected to.

If you put your mind to it and consider all these elements, you’ll start to be amazed at how reliable it can be, not how much it isn’t!

If you consider all of these factors, you’ll be amazed at how dependable it can be rather than the way around!

How much time does an automatic watch lose per day?

As we mentioned above, each movement has its own accuracy limitations, which vary depending on the degree of precision required. Typically, less-expensive movements have greater tolerances, but the history of watchmaking has seen some companies produce cheap movements with chronometric features.

In most situations, a watch anticipates rather than loses. This happens for a variety of reasons, the most frequent being that the mainspring must be changed after a certain amount of time due to “metal fatigue,” magnetization, which affects the delicate coils of the watch’s hairspring, and the need for a full tune-up.

Finally, you will notice that the same watch behaves differently concerning its timekeeping if it is worn or if it is kept resting on a surface: this is the reason why we were talking earlier about “adjustment in X positions,” where the positions are precisely the direction in which the watch is operating (for example, resting on a plane, resting on the edge, and so on).

Finally, if the same watch is worn or left resting on a surface, its timekeeping will differ. This is why we previously mentioned “adjusting X positions,” where the positions refer to the directions in which the watch is functioning (for example, resting on a plane).

Is it normal for an automatic watch to run fast?

As we previously mentioned, the general condition of a mechanical watch, whether manual or automatic, is that, over time, it gains rather than loses time, especially due to the fact that these are hand-assembled and manually adjusted little mechanical devices. The chance of a watch losing or gaining time on a daily basis is almost guaranteed.

If the timekeeping error is outside of the acceptable ranges given by the manufacturer, the watch should be examined by a qualified expert to determine the issue. The watchmaker cleans and oils the watch, then tests and adjusts the movement, ensuring that it is as accurate as possible under its most common usage circumstances, and to do so, he makes fine balance adjustments.

Remember that if you aren’t a watchmaker, it’s not a good idea to open a watch to make these modifications yourself because the warranty will be compromised, and you would risk contaminating an expertly carefully prepared closed environment. As we’ve said, it’s important to remember that the watch you’re wearing is a tiny mechanical machine that operates with extremely tight tolerances of tens or hundreds of small components working in tandem.

An automatic watch is a fantastic choice for people who want a mechanical watch with the practicality of an almost permanent winding mechanism. In addition, due to their high level of precision, most automatic watches will not disappoint in their time-keeping capabilities.

Curiously, almost all diver watches are automatic because they must avoid as much movement of the crown as possible, which would compromise their water resistance.