Are Watches a Good Investment? 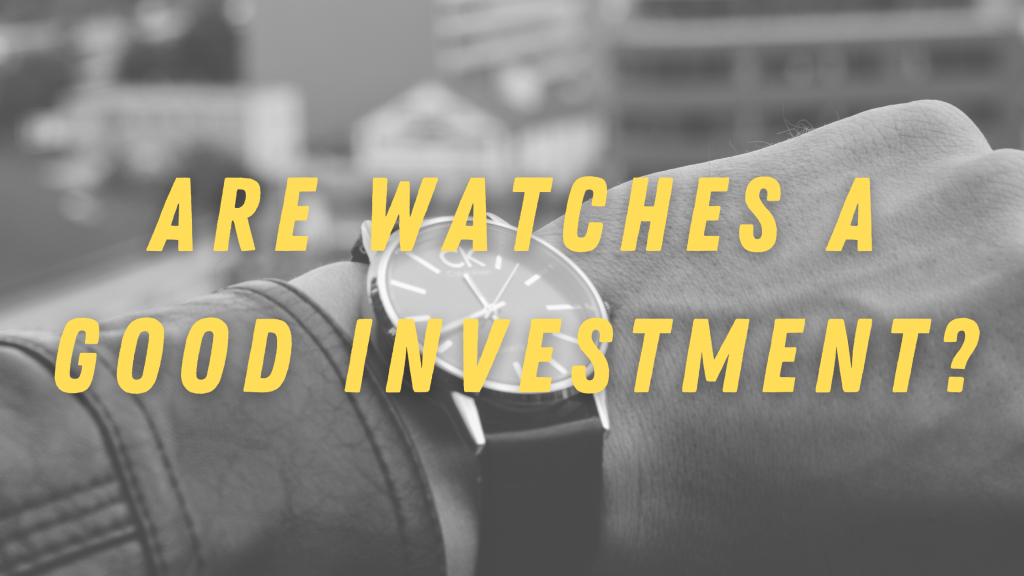 In a world where stock market crashes are becoming increasingly common, when cryptocurrencies and NFTs are growing at a dizzying rate, and where real estate and raw materials values swing dramatically owing to geopolitical events, it’s only natural that the speculative mania would spread to other areas.

And the world of watches is only an extension of this since people are now “investing” in art, classic cars, and even barrels of whisky. So let’s have a look at whether these much-touted prospects are true or false.

Are Watches a Good Investment?

There’s nothing wrong with wanting to invest in a better life, so if you want to start investing in watches, there are some things you need to know.  First of all, watches are not considered an investment like stocks and bonds. They are a “shelter good”-  a valuable asset that grows in value as the collection grows.

That said, are watches profitable? Will the investment pay off? The answer, again, is not as satisfactory as you’d hope: yes and no. Rolex has been ever-growing as a brand since 1905, and models like the nearly-discontinued Rolex Daytona have multiplied exponentially in value.

There are hundreds of other cases in which certain timepieces have not been appreciated in value but have instead lost it. It’s not a question of determining whether timepieces are a good investment, but rather which ones are and aren’t, depending on the model, edition, year, and even feeling. Consider the Rolex Daytona as an example: it is one of today’s most coveted timepieces, having been for a long period the least requested in the entire Rolex line, with production scheduled to cease in 1975.

When you’re looking to invest in a timepiece, there are a number of factors you need to consider. The initial cost is obviously important, as is the rarity of the watch. But other factors such as size and technical specifications also come into play.

There is an infinite amount of nuances that influence the market price of each watch. This can be far greater than the list price owing to supply and demand laws. The cost rises when there is a lot of demand and little supply.

Rolex dealers’ shop windows have been consistently empty for years, so it’s no surprise that you can’t buy a Rolex Submariner unless it’s significantly above its list price. So, keep that in mind when you’re wondering why watches are so expensive (at least in some instances).

What gives a watch value?

The value is established by the market and has practically nothing to do with the watch’s technical qualities or materials. A Rolex Submariner isn’t significantly different from a Blancpain Fifty Fathoms in terms of quality. However, you won’t find it difficult to acquire this beautiful timepiece at a list price at a Blancpain dealer.

This doesn’t happen with Rolexes. Rolex watches are still much more desirable than Blancpain timepieces even though Rolex has a manufacturing capacity that is almost twice as high as Blancpain’s – by around 40 times to be precise. This is only determined by the brand’s market strength; even when comparing it to a company superior to Rolex in terms of history and exclusivity (on paper at least).

So why does Rolex retain its value more than any other brand? Because it gives the illusion that it does. Until today, it has done nothing to grow its value apart from creating watches. Still, it confirms this fact, with prices that have skyrocketed in the last fifteen years, metamorphosing Rolex watches from simple “tool watches” into luxury items, purchased not for their technical characteristics, but for their cultural significance.

Do watches hold their value?

The automotive industry is a great analogy for the luxury watch trade. All cars have an initial value, which can vary from 25% to nearly 60%. After one year of usage most vehicles will experience significant drops in market price until their minimum cost becomes established – below which they probably do not go up again even when becoming vintage-worthy later on down the line! But there’s some hope: if you’re lucky enough and own a rare model or well-cared about your car then perhaps it might actually rise slightly due entirely different circumstances…

Watches typically decline until they reach a specific threshold, after which they stabilize and start to rise again, “dragged” by incentives comparable to those that cause car prices to soar. We are currently experiencing a polarization of luxury: luxury timepieces are getting more and more expensive, resulting in the loss of competitiveness of formerly extremely popular segments, like “affordable luxury”. This is forcing more and more businesses, especially those that have long targeted the lower-income sectors, like Seiko, to raise their prices in order to keep up with market conditions.

This is creating movement in the market where prices will match this polarization – without improving the fundamental quality. Will these timepieces retain their value over time? Let’s bear in mind that the traditional mechanical watch is no longer needed, but it remains a luxury item (and should put an end to the debate between standard watches and smartwatches). It is possible that, generally speaking, watch prices are set to rise in the near future. This means that even second-hand watches will maintain or increase in value.

How do you tell if a watch will appreciate?

If we knew, we wouldn’t be blogging about it, would we? However, there are indicators – absolutely empirical – that can be applied to examine the trends of the markets of unique products such as luxury goods and are based on the analysis of the general movement of the market in relation to its past performance – a bit like what happens with the performance of stocks, currencies, and any other financial product that is traded in the markets.

In a nutshell, marketplaces like Chronext, Chrono24 and Gnomon post historical performances of average prices for specific timepieces. By analyzing these, one may track the market’s performance, which is made up of a crowd of individuals with various degrees of momentum. The larger the market, the longer it will take to shift course (from a buying phase to a selling phase)

What factors are contributing to this movement?

Why do watches lose value?

A watch’s value may deteriorate for a variety of reasons, but one of the most prevalent is the end of a trend. One of the most striking instances was Swatch’s explosion in popularity during the 1980s and 1990s. These adorable quartz watches had a fascinating characteristic: they exhibited the collecting urge of people through inexpensive watch accessories that everyone could obtain in bulk. Because some of these timepieces were made in limited quantities, this resulted in the formation of a huge “speculative bubble,” which kept going for many years.

The public became wary of Swatches as a result of the large number of comparisons and models available. As a consequence, their pricing began to drop until it reached its current position, in which most people are no longer interested in these watches other than in rare circumstances: the recent appraisal of a vintage Swatch is one-fifth of its retail price.

In this case, the “bubble” that kept prices high has burst – but we must also remember that these timepieces’ technical specs are modest, which can’t be said about the current “bubble” involving Rolex quotes.

There are many different watch trends, as you can see. And when the trend fades, the quotes plummet, sometimes considerably. Franck Muller timepieces were very fashionable in the 1990s, but since Richard Mille’s introduction, Franck Muller’s clients have migrated to purchasing these other watches. As a consequence, today, Franck Muller timepieces are significantly undervalued in the second-hand market (and, in some cases, a really good bargain).

How to invest in watches?

To invest in timepieces, you must follow the same standards as a “traditional” investor would. And these are all issues of investment horizons. There are several “profiles” in stock market investing. Short-term investors, also known as “day traders,” and long-term investors, like Jimmy Buffett and Bill Gates, to name a few well-known examples.

The former operates on the market all the time, chasing trends and bubbles in order to speculate on them (and there’s no evil meaning in this term). In our case, they attempt to acquire timepieces that are “bullish” right now, to put it in stock market terms, and hope that the trend doesn’t fade. That is, they may acquire a second wrist Rolex Submariner and try to sell it at a higher price a few weeks later, based on their perception of the market’s direction.

However, the latter focuses on timepieces that are neither popular nor fashionable yet possess the correct qualities to be a solid investment in the future. This kind of investor tends to conduct few transactions and acquire assets that aren’t highly sought after at the time, but will soon become so. It’s even better if they are in a recession.

These investors anticipate market changes rather than pursuing them, and so they buy watches from brands of high-reputation, good build, and heritage.

So, first and foremost, you must locate a profile and then work within that profile to reach your objectives. And in order to do so, you must build expertise and understanding of the watchmaking industry beyond what is required of a basic watch wearer, particularly by staying up with the market changes.

The process of buying a watch is not as simple as many investment experts would have you believe. Rather, it’s a complicated sector with plenty of risks, especially because the market is now flooded with replicas, clones, and Franken making everything considerably more difficult.

If you want to get started in the world of timepiece investing, we suggest that you learn your trade and learn more about the market. If at all possible, avoid the easy enthusiasms and huge discounts that you will encounter on your journey: keep in mind that free cheese is generally found in mouse traps.