What do you do when you’re asked for financial data on the micro brand watch sector that if it even exists, no one has compiled before? If you’re MBWW, you accept the challenge!

I was recently approached by a blogger from ANZ BlueNotes, a local financial industry blog, looking for some data on micro brand watches. It quickly became apparent that little to no data exists on micro brand watches. This is understandable for new, small and decentralised businesses that range from hobby projects to SMEs that employ several people. Many of these companies are fiercely independent and have no requirements to report sales and earnings to anyone. Luckily for us a large number of these companies use Kickstarter for their funding and with a bit of effort the data on Kickstarter projects can be obtained and filtered for watch projects.

Now there are a few caveats with using this data as representative of the micro brand segment, most importantly that not all micros use Kickstarter or even crowdfunding platforms to launch their brands. They may also only use it once with future projects run on a pre-order basis off their own sites. Clearly we’re only getting a glimpse of the true figures with Kickstarter data. It’s also important to note that this data is not provided by Kickstarter, it’s scraped from their site using third party scripts that copy project data off the site.

Kickstarter is quite helpful in that they keep a lot of historical project data on their site so this is a viable collection method especially for the last 2 years where little data is expected to have lost, however there is no guarantee that some data hasn’t been lost in the process. Because these scrapes collect ALL projects there is a lot to filter and the filtering methods may also impact the accuracy of the data. That all said, the data does have value in showing the general growth trends as Kickstarter is by far the most popular crowdfunding platform generally and for watches in particular.

So on to the data. If you’re just interested in the results scroll on down to the charts, otherwise read on to see how I manipulated the data.

My main source is from Web Robots, a startup that specialises in web crawling and scraping data. I used their latest Kickstarter dataset dated 2015-12-17 which covers from mid December back to late 2010. My friend Liam helped me extract all the projects with the term “watch” in either the title or the blurb of the project. From there I filtered by category, excluding things like music and television. The main categories left were Accessories, Gadgets, Jewellery, Product Design and Wearables. From there it’s a matter of culling related projects, straps for Apple watches, charging stations for Pebble watches, cufflinks made with watch movements etc. I don’t think it will be too controversial to exclude smart watches from the definition of watch micro brands so these were cut too. This left me with a grand total of 280 projects from May 2011 to mid December 2015, 150 of which were successful.

Now I was concerned at the accuracy of my numbers do I had a look for some independent data sources to compare it to. I came across another scrape by Ben Rugg on Github that was created by his own scraper tool. This is a little more up to date and includes projects after mid December 2015. I repeated the same filtering methods on this data and came up with 272 projects in the same time frame as the Web Robots data with 131 of those successful.

I’m content that the two data sets align reasonably well so I’ve stuck with the Web Robots dataset since it has the added benefit of converting all projects funds to USD at time of funding which makes all the funding values comparable. The Ben Rugg data did not have this so was a bit less useful in that regard.

So here we go! the compiled data on Kickstarter micro brand watches for 2011-2015 that successfully funded: 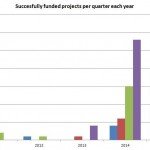 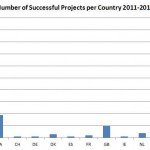 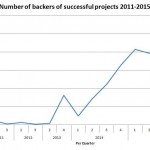 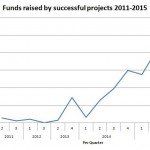 To honest I was quite taken aback at how much the micro sector has grown in the past 2 years. It certainly felt like there was a lot more activity but seeing it in the numbers brings a whole new perspective. Of course this doesn’t include any of the established micros who run their own pre-orders and those numbers are likely to be even more impressive. The growth in backers is very encouraging to see and goes to show something that I’ve been saying for a while, that there is plenty of opportunity for our market segment to grow and plenty of space at the table for everyone to find a seat.

What do you think of the results? have your own analysis you’d like to compare? let me know in the comments.

Please also have a read of the ANZ BlueNotes article – The times they are a-changing – for more insights and comments on the state of micro brand watches from myself and Dion McAsey of Magrette.

Update: 1/3/2016 – This article raised some great questions in the watch forums, I’ve tried to answer some of them with a new data analysis – Kickstarter facts and figues 2: Revenge of the Filter.